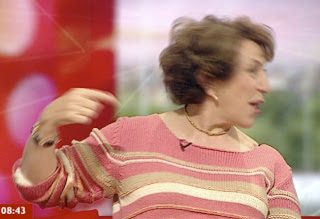 Leading Witch (Tory, ret'd) Eddie Currie is prattling that Rantzen will have no policies, will just be saying "I'm ME!"
Rantzen will have some policies (or "Bright" ideas as she may well put it) but little sense or insight, let alone balance.
La Currie, who had a high profile affaire with a powerful man just as Rantzen did, has the judgement of Lizzie Dripping. Ask the chickens . . .
It is like Johnson B but more so, Rantzen is a shoe in like as not.
I wonder if Sean Woodward - with whom she used to work we are told - will find divided loyalties?
Posted by Quietzapple at 8:41 am No comments:

As predicted Ms Rantzen will be standing in Luton S despite the withdrawal of the labour MP Ms Moran from the lists which she claimed was her objective.
Rantzen is a dangerous menace, and funnily enough her Wiki entry has been polished extremely nicely! Doris Day is lined up for the biopic.
No reference any longer to the scandals involving employment of her children at Childline.
Should Lumley stand also we shall be in danger of a new politics - neo nazi vs waffly lib.
Worth considering what happened to the politics of the Philippines when their celebs were ensconced in power.
Posted by Quietzapple at 7:30 am No comments:

Today they will not take a post which points out the facts that a 0.9% (the BBC says it is 0.8%) reduction in GDP in the past 3 months is a lot better than the 2.8% fall in the preceding 3 months. I asked also what they thought a pre-moderated poster might call those whose bias was as per the article.
According to their rules pre-moderation is used when they fear that a poster may produce offensive material.
As they are offended by any criticism of themselves, any pro Government posts, and references to the truth that they pre-moderate my posts they obviously have very big problems.
Posted by Quietzapple at 8:30 pm No comments:

We shall see if either of my posts re Cocaine and Cameron's use of it appears, this is the second:
Fu- u - u - u nny . . . Cameron D's drug uses have been down graded from "Scandals" to "Controversies" on WIKI:
"Allegations of recreational drug use
"During the leadership election allegations were made that Cameron had used cannabis and cocaine recreationally before becoming an MP.[144] Pressed on this point during the BBC programme Question Time, Cameron expressed the view that everybody was allowed to "err and stray" in their past. [145].
"His refusal to deny consumption of either cannabis or cocaine prior to his parliamentary career has been interpreted as a tacit admission that he has in fact consumed both of these illegal drugs. During his 2005 Conservative leadership campaign he addressed the question of drug consumption by remarking that "I did lots of things before I came into politics which I shouldn't have done. We all did." [145]."
BAD Examples all round: WIKI continuing the example set by Cameron's servant who changed the birthdate of Titian to suit the master's mistake in an argument with Gordon Brown; Cameron in snorting coke and telling others not to; and the Guardian in not posting my first comment on the matter, pre-"moderated" or censored as we used to call it.
Posted by Quietzapple at 7:23 pm 1 comment: I am still subject to pre-moderation, about half of my posts - none of them libelous, obscene or abusive, and all of them relevant to the relevant threads - do not appear.
Posted by Quietzapple at 1:12 pm 5 comments:

When I try to post on the Guardinid my posts are taken with the advice that they will be considered by their moderators.

Do the Dully Tele nazis who object to my posts pay some sort of bounty for each retained in the Guardinid's grasp?

People have noticed that the newspaper has slimmed down. More than 200 print readers have been in touch about the demise of The Comic, reduced radio and TV listings, and the disappearance of environment pages from the weekly Society section. In addition, the Sports editor told me, at least 60 people contacted the sports desk about the reduction in the number of sports pages.

Newspapers were in trouble before the recession. The business model began to look unbusinesslike when readers and advertisers migrated to the web, where content is free and revenue from advertising is lower. The recession made things worse and the Guardian has had to look at cutting its printing costs.

"Like all newspapers we face very difficult economic times, which means making difficult choices about how we allocate reduced resources," managing editor Elisabeth Ribbans told me. "Our commitment to quality, internationally based journalism remains resolute, evidenced by recent investigations into the death of Ian Tomlinson, the torture of terror suspects and the News of the World hacking scandal, as well as our street coverage of the upheaval in Tehran and a rare dispatch from forgotten Somalia. But in some areas we have reluctantly been forced to trim back."

More than 80 readers of all ages complained about the discontinuance of The Comic, but this was not the only part of the paper to be hit by cuts. Education and Society have dropped from 10 and eight pages of editorial, respectively, to six, and G2 has also become slighter.

The truncation of the daily radio and TV listings in May attracted over 60 complaints. "Why have you curtailed the radio listings?" asked a reader. "We now only get BBC Radio 3 and 4. What about the World Service and BBC7? You continue to list all sorts of obscure TV stations. What have you got against radio?"

Full listings for the week are in Saturday's Guide, so a decision was made to sacrifice them when four pages were cut from G2. "It is never easy deciding where to make cuts, but we felt readers would want us to prioritise the section's original journalism and content over information that is available elsewhere," said Ribbans.

Several readers who were given this explanation said they understood, but not all agreed with it. Editors reconsidered, and in June BBC7 and the World Service were squeezed back into G2. Unfortunately this didn't benefit readers in Ireland and Northern Ireland who lost all daily TV and radio listings when G2's pages were reduced – the Guardian's Irish printer can only adjust pagination eight pages at a time, so eight pages, not four, were cut from the Irish edition.

When environment pages were dropped from Society last month around 60 readers registered objections. "We feel that this decision was wholly ill-judged and betrays the well-earned reputation of the Guardian for championing environmental issues," said one complaint. The paper has tried to make reporting of green issues, particularly climate change, integral to the main paper, Ian Katz, the deputy editor, responded. "Environment is a priority areas for us and, despite the economic pressures, we have substantially increased our commitment to reporting the subject," he said. "Our team now runs to six with a China-based eco-correspondent, another in the US and the first green technology correspondent on any mainstream publication." He invited readers to look online too: "We are also concentrating on trying to establish our environment website as the world's leading source of environment news and analysis," he said.

Some readers object, not unreasonably, to being directed to web content when they are paying for the print edition: "I know I can go to your website for the information but I want to see it in print over breakfast, and I certainly don't want to bring my computer to the breakfast table," said one reader who complained about reduced racing coverage.

"We've tried to make savings as sensibly and sensitively as possible, but appreciate that not all readers will agree with our choices," said Ribbans. "If circumstances improve, we will look at some areas again."

Posted by Quietzapple at 12:23 am No comments: