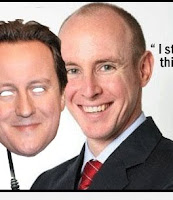 As I have repeatedly suggested it is the contradictions over Health policy and much else which makes Cameron's Party losers.
It is plain that in government Hannan, Carswell and perhaps a majority of new entry MPs would be against the commitments Cameron has uttered.
Now still more tories are saying there must be cuts in the NHS, while Cameron has unequivocally insisted he would bring year on year increases.
Ergo, if elected he will be forced into resignation, as soon as there is a crisis presented in the Billionaire media in a convincing way, so that his promises are ditched with him . . . . If he can get elected, as he rightly fears he may not, according to Tim Montgomerie, who should know.
Osborne or Johnson or some more capable scunner like Hannan (pictured) would then do the Billionaires' bidding: cut expenditure on all but security, cut taxes, sell assets below market value. No pursuit of Billionaires into their tax havens. Oh, he might get to play at "localism" too . . .
Another recession . . .
Posted by Quietzapple at 5:22 am