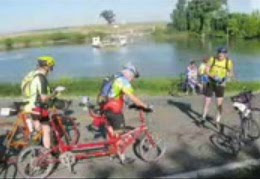 Hopes by Boris Johnson that Barack Obama's new ambassador in London would pay almost £3.5m in unpaid congestion charges and fines run up by the previous administration were dashed today as the new regime confirmed it has no intention of settling the bill.

A spokesperson for the mayor of London said that Johnson, who is on holiday, was disappointed that the US embassy was choosing to "continue to ignore" its responsibility to Londoners by paying the £8 daily charge incurred by those driving within the city's congestion charge zone, as well as fines built up for non-payment.

Poor turns of phrase, and poor show by Obama's local reps - eh, what?
But Johnson B and his dubious collection of cycles (so many have been lost or stolen he must need a fair few reserves) can, almost uniquely, do something useful.
Time for him to face down 42nd street, and for his circus of Deputy Mayors to take on the might of New York's finest (well the political wing anyway).
Allez vites l'opera comique anglais!
Posted by Quietzapple at 10:06 pm